In Florida, and pretty much the whole USA, New Years Eve is celebrated with friends and family, food and drink, a toast to ring in the new year, A kiss to commemorate what will be and watching the countdown at Times Square.

I thought it might be fun to see how the rest of the world celebrates New Years!

These traditions still carry on:

And what would a blog like this be without uncovering a few rather odd New Years Traditions:

Whichever way you celebrate and whatever your traditions, We girls at Brides N Blooms, Wholesale & Designs will raise a glass and toast to the New Year, wishing everyone a year of joy, happiness, peace, prosperity, good health and good cheer.

Now go out and have yourself a flower-filled New Year!

You know… Both of us girls at Brides N Blooms Wholesale & Designs have been living here in the Tampa Bay Area for many years. We both are originally from New York, though one of us is from the ‘city’ and the other is from farther northwest into the state.  I have to say that spending a winter in Florida is a culture shock. It’s one that even after all these long years, still makes us shake our heads in wonder.

Here are a few things that will always amuse us:

I think we here in the Sunshine State know just how silly we appear to those who are experiencing that traditional “White Christmas”, but the truth is… we don’t care! We love our flip flops and darn it, no Christmas day cold snap is going to make us take them off!

I say, lets revel in our warm air while those up in the northern climates are bundling up! let’s decorate that lawn flamingo with all the lights it can hold! Let’s plant those poinsettias we’ve bought because, yes, they will grow here!

And last but not least, lets leave Santa a little bit of orange juice and a pair of sunglasses when he stops by on Christmas Eve!

Wishing you all, our dear readers, a very happy Holiday Season and a Wonderful New Year!

So… how exactly did the Poinsettia become associated with the Christmas holiday?  I wondered, so I did a little research! Here’s what I found…

Poinsettia plants are native to Central America… mostly in the area of southern Mexico known as ‘Taxco del Alarcon’ is where they grow and flower in winter. The ancient Aztecs called them ‘cuetlaxochitl’ and they had many uses for them. Two important ones were the use of the flowers (actually it is not so much as a flower as the special types of leaves known as bracts). One was to make purple dye for clothes and cosmetics and the other is the milky white sap was made into a medicine to treat fevers. (Today the sap is called latex!)

Poinsettias didn’t arrive in the United States until 1828 when the plants namesake, the first U.S. Ambassador to Mexico, Dr. Joel Roberts Poinsett brought them here. After discovering it in the wilderness in southern Mexico, Dr. Poinsett, who dabbled in botony, sent cuttings of the plant back to his home in South Carolina.  While it didn’t gain much attention at first, its popularity caught on over the years, and by the 20th century it became a holiday mainstay. So much so, that there is now a National Poinsettia Day which is celebrated on Dec. 12, to honor both the plant and the man who brought it to America.

Okay…  But what does any of this have to do with Poinsettia being associated with Christmas? Well… I’ll tell you!

According to one interpretation, the plant is as a symbol of the Star of Bethlehem, the heavenly body that led the three magi, (wise men), to the place where Christ was born. There is also a Mexican legend which tells of a small girl named Pepita, who could only afford to offer weeds as a gift to Jesus on Christmas Eve. When she brought the weeds into a church, they blossomed into the beautiful red plants we know as poinsettias, ( also known as Flores de Noche Buena in Mexico, which is Spanish for “flowers of the holy night”).

Whether the Poinsettia has a special connection for you with the season or if you believe the story or not,  it makes no matter. I say, lets just choose to admire the vibrant colors this plant shows off at this special time of the year and enjoy! 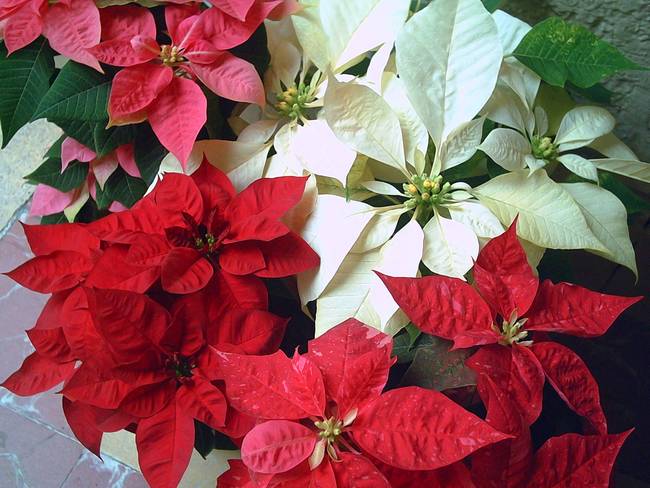 Brides N Blooms Wholesale & Design is offering some of these beautiful poinsettias at a great price. If you are local to the Tampa Bay Area, call today and find out how to get yours! 813.852.2052

Now go and have yourself a wholesale holiday poinsettia and fresh flower filled day!

We may request cookies to be set on your device. We use cookies to let us know when you visit our websites, how you interact with us, to enrich your user experience, and to customize your relationship with our website.

Click on the different category headings to find out more. You can also change some of your preferences. Note that blocking some types of cookies may impact your experience on our websites and the services we are able to offer.

These cookies are strictly necessary to provide you with services available through our website and to use some of its features.

Because these cookies are strictly necessary to deliver the website, refuseing them will have impact how our site functions. You always can block or delete cookies by changing your browser settings and force blocking all cookies on this website. But this will always prompt you to accept/refuse cookies when revisiting our site.

We fully respect if you want to refuse cookies but to avoid asking you again and again kindly allow us to store a cookie for that. You are free to opt out any time or opt in for other cookies to get a better experience. If you refuse cookies we will remove all set cookies in our domain.

We provide you with a list of stored cookies on your computer in our domain so you can check what we stored. Due to security reasons we are not able to show or modify cookies from other domains. You can check these in your browser security settings.

We also use different external services like Google Webfonts, Google Maps, and external Video providers. Since these providers may collect personal data like your IP address we allow you to block them here. Please be aware that this might heavily reduce the functionality and appearance of our site. Changes will take effect once you reload the page.